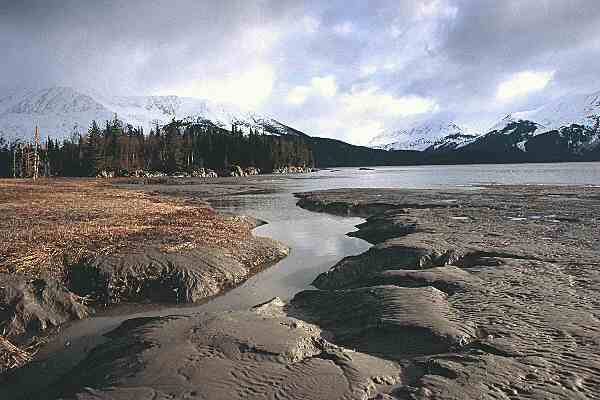 West side of Bird Point, on Turnagain Arm 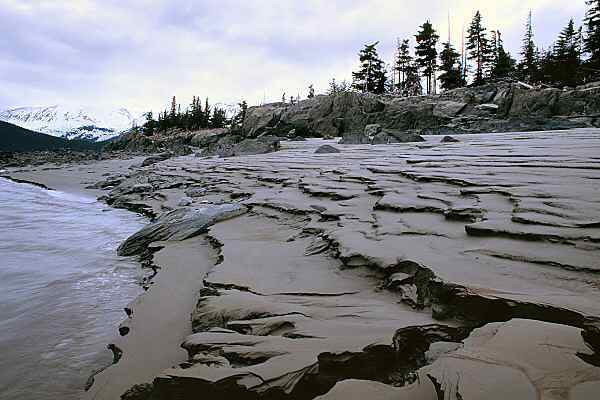 Bird Point is an exceptionally scenic and frequently windy area where the rocky bones of the Chugach Mountains push into the mudflats of Turnagain Arm. Many small creeks carrying glacial silt from the mountains drain into Turnagain Arm. The mudflats shown here are formed by a continuous process of deposition and erosion by the tides. This particular area is about 2 km from the public parking lots and is not recommended for hikers.

The mudflats of Turnagain Arm are treacherous and have caused several deaths over the years. My tripod is set up in a solid area but farther out the mud is saturated with water and although its appearance is only slightly altered its bearing capacity is zero. If you step into it you will likely loose your boots or worse, you will not be able to pull out your legs. In which case you should immediately send for help because the tide is coming in.

Tides in Turnagain Arm have an extreme range of 12 meters (40 ft) and are among the highest in the world second only to the Bay of Fundy between Nova Scotia and New Brunswick in southeastern Canada. Spring bore tides in Turnagain Arm can be 2 meters high and can travel at speeds up to 10 knots.