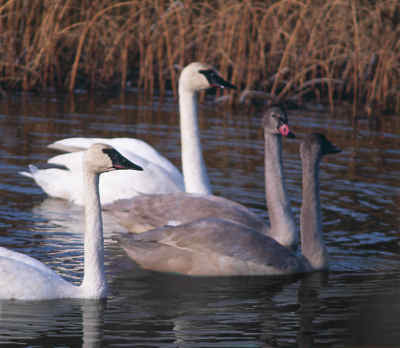 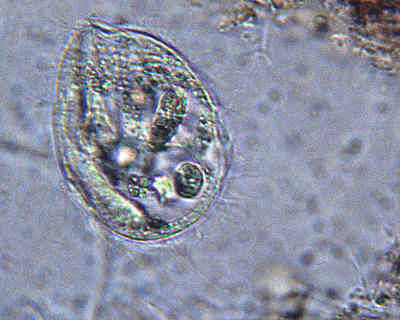 A ciliated protist, photographed through a light microscope at 580X. This protist is 100 microns across. Found in a drop of pond water from Potter Marsh in Anchorage, Sept. 17, 2004.
Right click to Download hi-res photo file.
File size:117kb Type:JPG 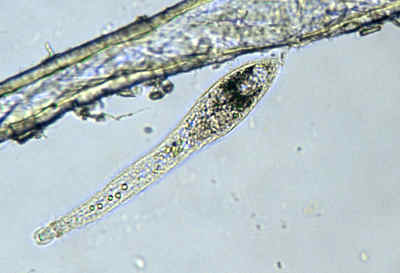 Possibly a Litostomatea, a large ciliated protist, browsing along a piece of detritus in a drop of pond water. The protist is 150 microns long. Water taken from Potter Marsh in Anchorage, Sept. 19, 2004.
Right click to Download hi-res photo file.
File size:177kb Type:JPG 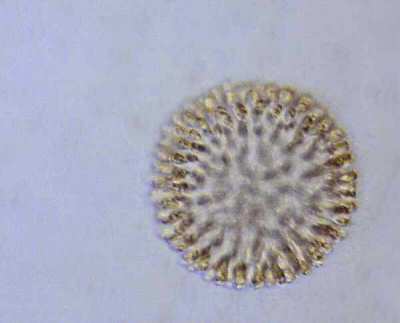 Possibly a Chrysophycea, a colonial form of golden algae. Photographed through a light microscope. The colony is 120 microns in diameter. In a drop of pond water from Potter Marsh in Anchorage Sept. 19, 2004. 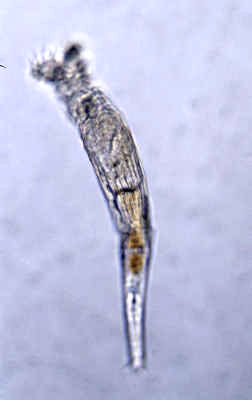 A female rotifer is an example of a multicellular animal. Males are one tenth the size of females and probably do not occur in most species. The rotifer is 270 microns long and comprises about 1000 nuclei. Photographed through a light microscope. Found in a drop of pond water from Potter Marsh in Anchorage Sept. 19, 2004. 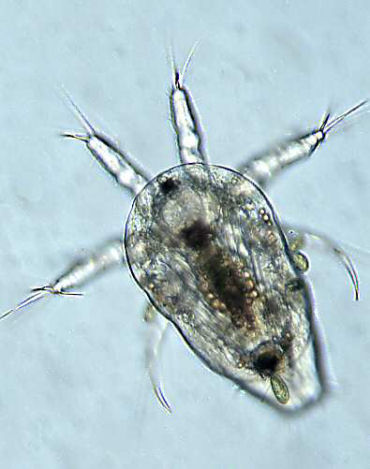 A nauplius, the larval form of a copepod, a microscopic crustacean. Copepods go through 6 larval stages, a metamorphosis and 6 more adult stages. This nauplius is a first or second stage larva. Photographed through a light microscope. The nauplius is 280 microns across, including the legs. In a drop of pond water from Potter Marsh in Anchorage Sept. 19, 2004. 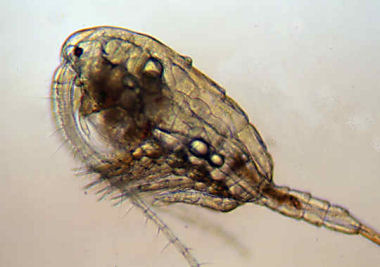 A cyclopoid copepod is a microscopic crustacean related to shrimp and lobsters. This one is too small for dinner, about 1 mm long (1000 microns) from head to tip of tail, but it is a giant in the micro-world. Abundant in water from Potter Marsh, Anchorage Sept. 19, 2004.

Adult Trumpeter Swans "scratch" at the marsh floor the same way hens scratch the ground. Then they turn upside down to see what they can find. Potter Marsh, Anchorage Oct. 5, 2004.
Right click to Download hi-res photo file.
File size:453kb Type:JPG

Trumpeter swans are the largest swans in the world and are among the heaviest flying birds, sometimes weighing forty pounds. Alaska is home to 80% of all nesting Trumpeter Swans (Armstrong 1983). Trumpeter Swans have lived up to 29 years in captivity and mate for life. The largest breeding grounds occur along the coast of the Gulf of Alaska...(more) (Bellrose 1980). If you get too close, the adults, ever vigilant, begin a slow musical honking. They round up the young cygnets and glide into the sedges. Although we see large animals capable of complex behaviors everyday we hardly ever stop to ask ourselves how they got to be that way. Let's take a closer look.

The swans swimming in Potter Marsh, and all multicellular animals are collectively called metazoans (literally, "after animals") to distinguish them from the beings that came before them, the protozoa. One of the great challenges of biology is to discover the development of metazoans from their unicellular ancestors and we can accept that challenge wherever we are, in this case without even leaving the brackish waters of Potter Marsh.

Most biologists believe that the first unicellular organisms were a type of bacteria that originated shortly after the earth cooled enough to support life almost 3.5 billion years ago. The bacteria were the only cellular life forms for over a billion years, but eventually a new unicellular life form known as a protist began to proliferate 2 billion years ago. Margulis (1998 , pg 62) describes them: "Some live in puddles, some in tree holes, others in lakes; still others float in the ocean. Although all are aquatic beings, none is either animal or plant...(more)." A few days ago, on a rainy September afternoon, I scooped up a few pint jars full of mud and algae from different areas of the marsh and took them back home to examine with a microscope.

The protist shown in the photo, a ciliated form, has a round, well defined nucleus. This is our first clue in tracking down the origins of muticellullar animals because they also have this kind of nucleated cell which is called a eukaryotic (literally "true nucleus") cell. You can also see organelles such as many small mitochondria. Cilia that look like fine hairs covering the cell are visible around its circumference. The membrane bound organelles and the nuclei, of which there could be many, distinguish eukaryotic cells from the bacteria, all of which lack nuclei and membrane bound organelles. The tiny out of focus dots in the background are bacteria, too small (2 micron diameter is typical) to be seen well at this magnification.

Even though eukaryotic protists are unicellular, they accomplish all the functions of a metazoan (muticellular organism) that has specialized organs (Ruppert and Barnes. 1994, pg 13). Like all organisms, their primary hungers are for food and reproduction. In the service of these drives they eat other organisms (phacocytosis), digest their food with enzymes in food vacuoles, regulate their water content with a contractile vacuole, extract energy from food by cellular respiration, and produce energy-rich molecules in mitochondria. They can also expel waste products (exocytosis) through an anal pore, swim incredibly fast by coordinated movement of the cilia, reproduce asexually by splitting in two parts (binary fission), or sometimes reproduce sexually by conjugation with another ciliate. They possess light sensing pigments, respond to changes in temperature and fluid flow and know more math than most college graduates. In short they can do anything you can do and they only need one cell to do it with. This makes protists generally larger than mammalian cells and the most elaborate of all cells with a very complex chemistry (Campbell, Reece, and Mitchell. 1999, pg 520).

Most protists spend their lives as individuals but a few live in colonies and have thus taken a step along the road to multicellularity. A colony is a group of related cells more or less loosely organized with little cellular specialization. Protist colonies, such as the marine radiolarians and the cellular slime molds, can be interpentrated by protoplasmic strands that coordinate movement, feeding, and reproduction but they do not acheive the level of specialization that would define a metazoan with a nervous system and internal organs. As an example, the flagellated protists of the phylum Chrysophyta, commonly called "golden algae", sometimes occur in spherical colonial forms that float freely and move by coordination of their flagella. The one in the photograph was spinning in place, like a planet in space, at the rate of approximately 10 rpm when I took its picture.

The development of metazoans from single cells through the evolution of colonial forms is a possible route to multicellularity. Biologist Richard Boardman (1973) comments on a late nineteenth century view: "....Perrier (1880, 1881, 1898) represented a nineteenth century extreme that considered all multicellular animals to be colonies of cells that to some extent retained their individuality, and most higher animals to be colonies of higher-level individuals....(more)." If Perrier were right, then we humans would be integrated colonies and our organs could have retained a high degree of independence. John C. Lily, M.D. who gained scientific fame for his study of dolphin communication, described his journey into the cellular and molecular levels of the human body in his well known autobiographical book The Center of the Cyclone (1972) : "I traveled among cells, watched their functioning and realized that within myself was a grand assemblage of living organisms, all of which added up to me"...(more)."

The rotifier, a simple metazoan animal only a little larger than many protists, generally lives in fresh water, but there are a few marine forms. Despite its tiny size, the rotifer has a simple nervous system, muscle system, digestive tract and other organs, but no heart and no gills. It is so small it can accomplish these functions by diffusion. Each species of rotifer always consists of the same number of cells, about 1000, but tissues in the adult are syncytial which means that separating cell walls have dissolved thus leaving a multi-nucleated protoplasm. Reproduction is by parthenogenesis so male rotifers have never been seen in most species (Buchsbaum et. al., 1987). Even though this animal seems to represent a small increase in complexity and integration beyond that of a colony no clear link has been found to the protists. In fact there are many gaps in our knowledge about how animals are organized and integrated.

Another popular proposal for the development of metazoan bodies is the theory of symbiogenesis- the evolution of species through symbiosis. According to biologist Lynn Margulis (1998, pg 38), "Symbiogenesis, an idea proposed by its Russian inventor Konstantin Merezhkovsky (1855-1921), refers to the formation of new organs and organisms through symbiotic mergers. As I will show it is a fundamental fact of evolution. All organisms large enough for us to see are composed of once-independent microbes, teamed up to become larger wholes. As they merged, many lost what we in retrospect recognize as their former individuality." Symbiogenesis has been demonstrated in metazoans as well as protists...(more).

A cyclopoid copepod is a metazoan animal with many specialized organs including a simple nervous system ...(more), but has no true heart and no gills (Thorp and Covich, 2001). Named for its single eye, it is a fresh water micro-crustacean that sometimes preys on rotifers. The larval forms which go through a series of 6 molts are among the fastest organisms known. Most microscopic life is in constant, rapid motion, and is a challenge to photograph, but the copepod nauplius is nothing short of astounding. According to one source it is able to move over 364 body lengths in 1 second (Thorp and Covich, 2001). Fortunately it rests for a few seconds between jumps. After the 6 larval molts a type of metamorphosis produces the adult form which continues to develop through another 6 stages. The stages from egg to adult take a few weeks and then the adult lives for a few months.The marine variety of copepod is similar to this freshwater cyclopoid and are the most abundant component of plankton, occuring in enormous numbers (Ruppert and Barnes. 1994, pg 759). According to Buchsbaum (1987 pg 341) marine copepods are called "insects of the sea" and are the most numerous animals on earth.

The occurence of forms and actions in organisms follows a pattern, whether it is a physical pattern like the shape of a jellyfish or a functional pattern like the reproductive cycle of a copepod. This is what is called a habit. See Habits Last a Long Time. I am presenting a few Photo Essays, listed in the menu to the left, to illustrate some habits found in the organic world and, by extrapolation, in ourselves. The categories on the main menu at the top of this page access the other photos on the site.

Download the photos by right clicking on the link at the bottom of the image and selecting the "Save target as" option. The download file has a resolution of 200ppi and can be used to print a photo quality image. Or, view it full scale on your monitor. On most monitors this would result in a magnification of 2500X for the protists (on a 1024 x 768 pixel screen). A 56kb modem should download each file in less than one minute.

A note on the images: The image files displayed on this site are 15Kb to 50Kb and will load in several seconds. The screen image resolution is 72 ppi, just right for most monitors, and the files are not large.There are presently over 350 images distributed on over 100 pages. Most of these images were shot on Fuji Velvia ISO 50 and scanned onto CD by a professional photo lab. None of these images has been digitally altered. All of these images are copyrighted (©2003, 2004 Anderson-Smith ) but can be freely distributed for non-profit purposes, especially educational uses. Commercial use requires the permission of the copyright holder. Contact the webmaster at Anderson@AnalogicalPlanet.com