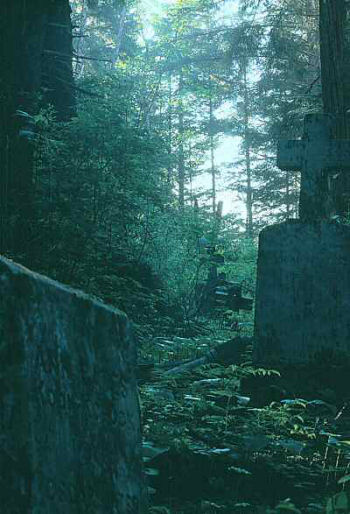 Organic life is inescapably periodic because Nature is based on matter which has its inception in polarization. The Old Cemetery. Sitka, Alaska, 19 May, 2004

Paired opposites in ancient iconography: The Burney Relief, a terracotta plaque from Babylonia, circa 2000 B.C. I have digitally altered the background to show the sovereignty of the goddess extended into the realm of macromolecular processes. Her talons rest on a pair of opposite lions depicting the violent and voracious forces of Nature and their submission to her . She is flanked by her owls representing dominion in the underworld . She holds in her hands the rod and the ring, symbols of encapsulation and connectivity (my interpretation). The four-tiered horn crown denotes her rank as a high goddess. The plaque was recently purchased by the British Museum where it is described in detail on a British Museum web page. I have provided a web page on this site with references and an unaltered image of this important artifact.

Selected milestones in biology: Robert Hooke observed cells in cork with a rudimentary microscope in 1664, but did not realize their significance. It was not until 1839 that Theodor Schwann and Mattias Schleiden concluded, on the basis of their microscopical studies, that cells are the basis of life. Charles Darwin published Origin of Species in 1859 wherein he described the variation of types of plants and animals based on naturally occuring changes, environmental selection, and intra-species competition. Oswald Avery, working with Streptococcus bacteria in the 1930's, determined that DNA was the long sought genetic material. Francis Crick and James Watson finally announced the molecular structure of DNA in 1953. Since then molecular biology and biochemistry have become the primary means of describing the mechanisms of inheritance, protein assembly and metabolism in general and evolution continues to describe variation of types based on fitness. Despite these and many other important developments in biology there is not yet an over-arching theory, a "unified theory" of biology that describes the organization of organisms.

Ludwig von Bertalanffy (General Systems Theory 1969 pg 70) said "In this contrast of wholeness and sum lies the tragical tension in any biological, psychological and sociological evolution. Progress is possible only by passing from a state of undifferentiated wholeness to differentiation of the parts. This implies, however, that the parts become fixed with respect to a certain action. Therefore progressive segregation also means progressive mechanization." On the folowing page he states:"The principle of centralization is especially important in the biological realm. Progressive segregation is often connected with progressive centralization, the expression of which is the time dependent evolution of a leading part... At the same time, the principle of progressive centralization is that of individualization. An individual can be defined as a centralized system."

"This and the chapter that follows will be devoted entirely to a study of the development of this new unity, planetary in dimensions, and of its properties: the proposition accepted initially and justified as we proceed being that if socialization (as is proved by its 'psychogenic' effects) is in every instance nothing more nor less than a higher effect of corpusculization, then the noosphere, which is the final and supreme product in man of the forces of social ties, can take full and final significance only if one condition is satisfied. That condition is that we look on the noosphere, taken in its global totality, as constituting one vast corpuscle in which, after more than six hundred million years, the biospheric effort towards cerebralization attains its objective."

Father Teilhard neither supports his assertion that the noosphere must be a global unity nor that it is due to cerebralization, but the introduction of this idea is important in itself for it raises many questions of a practical nature for human collectivities. He is a great thinker of cosmic scope. He says that physical systems under pressure change structure or state and that biological systems change their organization. This is not scientific rigor, but a fertile idea conducive to further exploration. If anything, his keen speculations on social compression and interiority leave one wishing that he had divulged more of his personal vision unhindered by the need for causal analysis and the cloak of scientific language. There are some big ideas in this little book.

Francisco Varela (Principles of Biological Autonomy 1979, pg 15) enumerates some characteristics of living entities which he characterizes as autopoietic machines.

"The consequences of the autopoietic organization are paramount:

N-dimensional space ia a conceptual weapon against the monster of materialism. Just as music begins and ends in silence so materialism begins and ends in your own mind. Trapped in sensory space, you have no hope of skewering the leviathan with the pathetic wooden sword of sensory experience. Your only hope is to conquer the beast en passant, by slipping into a different realm, vaguely known to materialists as an N-dimensional manifold (see McCleary, John. 1994. Geometry from a Differentiable Viewpoint. This undergraduate level mathematics text contains a chapter on differential topology and a reprint in English of Riemann's lecture "On the Hypotheses Which Lie at the Foundations of Geometry" delivered in 1854 at the University of Gottingen). The mathematician John McCleary states "The union of space and time that lies at the basis of special relativity may be described by a slight generalization of the Riemannian metric."

N-dimensional manifolds are a largely unexplored realm, unavailable to the senses and untrusted when directly percieved. A single point in n-dimensional space (the space you are in now) is many points in 3-dimensional sensory space. The topology of atomic entities is the bridge that spans the chasm from matter to mind, a bridge in the ultra structure of cells. It is by this fact that biological organisms access the storehouse of Nature's memories.

Organisms are typically symmetric because of their polar genesis. In our sensory space, sometimes called the cube of space, plants can be symmetrical about all three planes x, y, and z. About the y-plane (left-right symmetry) plants can be bilaterally symmetric as in pinnate leaves, zygomorphic flowers and opposite branching. About the z-axis plants show varying degrees of rotational or radial symmetry typified by flower petals, sepals, stamens, and pistils. About the x-plane the roots are a shadowy reflection of the aerial parts when we take the plane of reflection to be the surface of the ground, their attachment point to the earth. In animal forms, such as our own, the same symmetries can be found: bilateral, rotational, and vertical. Vertical (top-bottom) symmetry in mammals takes the plane of reflection through the umbilicus.

As with all organizations, two different categories present themselves. There are those properties based on the characteristics of the parts and there are those properties based on the way the parts are arranged. For example, given a few integrated circuits, a fan, some wire and some control switches we can definitely say we are looking at an electronic device. If we examine the parts carefully we can even determine the intended voltage and current outputs, motor speed, power consumption and so forth, but until we see the specific arrangement of the parts, their connections, we do not know whether we are looking at the parts for a vacuum cleaner or a computer.

In the most general sense encapsulation and connectivity are a pair of opposites. Encapsulation denotes the enfolding, modularizing principle while connectivity is its opposite, extension and penetration. Living beings are not in themselves unities but are at their highest levels of organization a cluster of relatively independent entities, each of which has its own lineage of progressive extension, encapsulation, and habits. When you feel pangs of hunger in your stomach you may "think" that your "sensations" and your stomach are a single organized entity but actually what you "feel" is not your stomach at all but only a part of your nervous system. "You" "feel" the impulses propagated through the innervation of the stomach and which go thence to ganglia and higher nerve centers in the brain. Thus there are several relatively independent pathways or modules in animal organisms, the lower visceral, the sensorimotor, the upper visceral or thoracic, and the autonomic which penetrates the body like fungal fibers penetrating a piece of fruit.