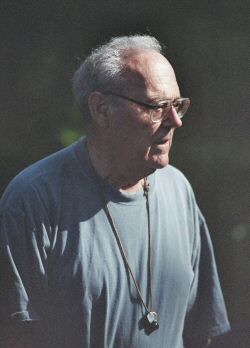 Dr. Wilf Schofield responding to a student's question about the epiphytic habitat of Hypnum circinale. 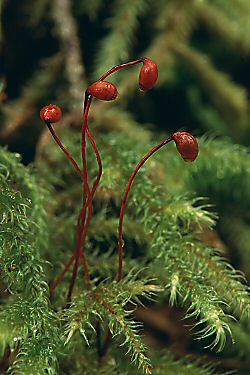 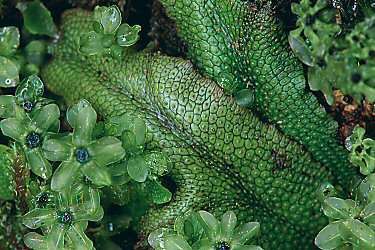 Twenty professional and amateur naturalists had a real treat when they attended the "Bryophytes of Southeastern Alaska" workshop held on the campus of Sheldon Jackson College, Sitka, Alaska. Not only did we encounter beautiful sunny weather for the entire time, but also had the pleasure of learning from an internationally known expert on bryophytes, Dr. W. B. Schofield, Department of Botany, University of British Columbia, Vancouver, Canada.

The workshop began with an introduction by one of its organizers, botanist Stephen Talbot, Div. of Natural Resources, U.S. Fish and Wildlife Service. Stephen spoke of his seven years association with "Wilf" Schofield including his own projects on the Aleutian Islands where he witnessed Wilf's cliff climbing capabilities. Stephen also mentioned Dr. Schofield's worldwide exploits in bryology which began in 1947 including field work in the Arctic, subarctic Canada, Australia, New Zealand, Japan, Taiwan, Europe, as well as the U.S.A.

Dr. Schofield's publications are too numerous to list here but include over 100 papers and co-authorship of 4 textbooks on plant evolution and structure. He is a contributor to bryophyte flora of North America and of Australia and is the author of the article on bryophytes for the Encyclopedia Britannica. His Introduction to Bryology (1985) is the standard textbook in the field. The primary texts for the workshop were Schofield's Some Common Mosses of British Columbia (2nd ed. 1992), and his Field Guide to Liverwort Genera of Pacific North America (2002).

The first day of the workshop was devoted to a brief overview of moss morphology and systematics followed by several hours of keying moss specimens collected along trails in the area by Wilf and Stephen before the start of the workshop. We followed a similar procedure on the second day focusing on the liverworts. As we examined the mosses with dissecting microscopes, Dr. Schofield ( who asked to be called Wilf) read through the keys and asked for choices to be made. Are there more than two rows of leaves? Are the leaves squarrose? Are they falcate and secund? Are the tips blunt or attenuate. Are they flat or sinuous? Are sporophytes present? Do they look like little trees? And so forth.

Many explanations were needed to clarify the terminolgy and pronunciation or current status of a taxonomic group. Wilf said over zealous application of the species concept by a few past workers resulted in the assignment of too many species names to the same organisms based on minor variations in morphology. He estimates that there are "10,000 moss species, generously, and 8000 to 9000 liverwort species worldwide". As for the use of genomic data for assigning organisms to various groups, Wilf favored the idea that if the phenotypes were indistinguishable in the field then the genomic evidence had to be assessed in that light rather than creating new species.

Always a teacher, Wilf carefully listened to every question and answered each one at length. At one point he remarked on the difference between training and education. He said that regrettably, the university system has lost sight of the difference and is more concerned with training for high tech jobs than providing the opportunity for a true education. While talking to him in the lab at the end of the day he confirmed that in the biological sciences the emphasis on biotechnology and molecular biology was bought at the expense of organismic and naturalist studies.

"We study bryophytes because they are fascinating ,"he emphasized "as well as for documentation for ecology, physiology,and chemistry." He said that it was remarkable that a biflagellate moss sperm can swim 1 to 2 meters if necessary to follow the diffusion gradient leading to the female archegonia."They must be very earnest, "he said. "As always, it is necessary to be earnest to obtain success".

On the third and final day of the workshop we started with a walk through nearby Sitka State Historical Site, which like Sheldon Jackson College is right on the water of Sitka Sound. Wilf lead the way. Although we didn't climb any cliffs in Sitka, Dr. Schofield's stride on a trail is easily 6km per hour. He looked for good specimens in their typical habitats. Hypnum circinale on the trunks of trees, Isothecium stoloniferum festooning from their branches, Buckiella undulata at their bases, Rhytidiadelphus squarrosus in grassy lawns, Rhizomnium glabrescens or R. insigne on humus or rotten stumps, Brachythecium asperrimum on Sambucus racemosa (Red Elder) and so forth. We kept up with Wilf for three hours and identified about forty mosses and liverworts in the park.

During the course of the workshop Dr. Schofield mentioned several books on mosses and liverworts. With the exception of the book by H. A. Crum, the other references can be found in the bibliography of Schofield's Introduction to Bryology along with many other entries. 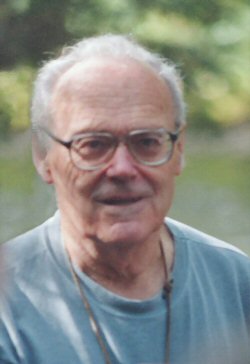 "There's a story that goes along with the naming of this species" - Dr. Wilf Schofield

Download the photos by right clicking on the link at the bottom of the image and selecting the "Save target as" option. The high resolution download file can be used to print a 200ppi photo quality image 14cm x 21cm. A 56kb modem should download each file in about one minute or less. All of these images are copyrighted (© 2003, 2004 Anderson Smith ) but can be freely distributed for nonprofit purposes, especially educational uses. Commercial use requires the permission of the copyright holder. 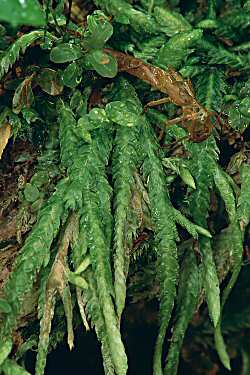 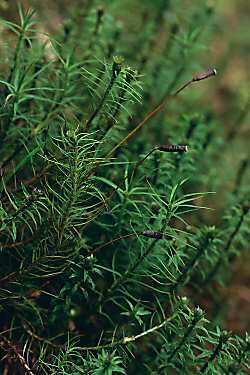 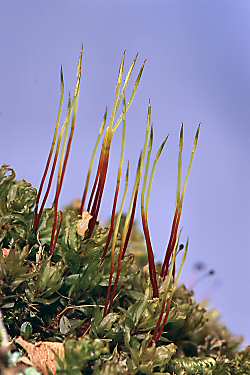 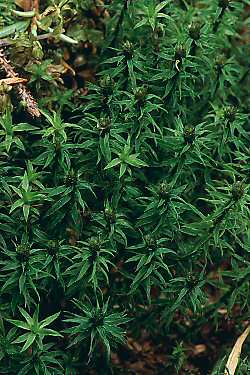 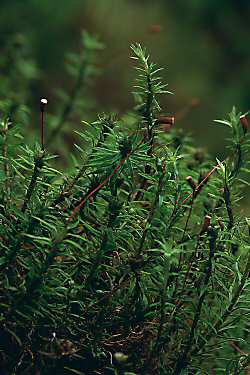 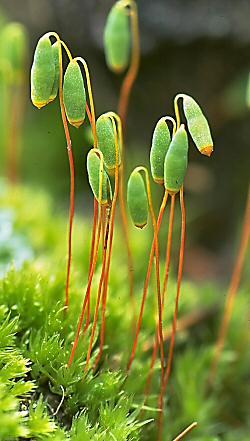 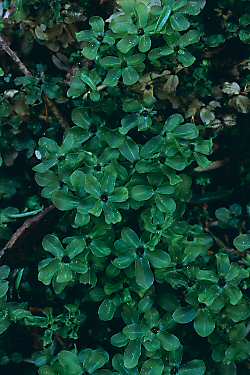